One of my favourite Swedish painters is Olle Krantz, he lived and created his art on the island Visingsö. He built an estate on the island a kind of haven which reflected and displayed his art, Tempelgården (the Temple estate). My parents knew his so I had the opportunity to meet on several occasion in my youth. At the time I don’t believe the art was what fascinated me the most, it was the temple and his home; His home is best described as a mix of Pippi Longstockings house and the treasure cave of Aladdin. If my memory serves me correct there where things and trinkets everywhere, mixed with colours and art of different kinds, you could look all day and still not be able to get it all in – I loved it.

Today I appreciate his art, I like the way he used colours, mixed the naive with expressionism and his capturing of the moment.

Women by the waterfront

As I was in Jonkoping during the holidays I spotted some of his paintings and photographed them thinking I write a post on him. A few days ago I googled him and found close to nothing, now that’s a shame – but my father use to save articles and such so I asked him if he saved any on Olle Krantz. As I guessed he had and hence a post on a artist from the island Visingsö in lake Vaettern, Sweden.

Olle Krantz was born at Visingsö in 1906 one of eight siblings. In an Interview from 1993 in local paper Jonkopingsposten (JP) Olle talks about his art. The paintings often depict scenes of love, bodily pleasures and bare women others concerns biblical motives and questions concerning his personal faith and yet others are pictures from his life, for example from his childhood on Visingsö, from his first marriage and his later partner Rut who died due to illness.

In the article he talks about the therapeutic value of painting as a way to deal with the grief and find both happiness and meaning in life. His main purpose with his art was not to get recognition but to feel good and joy within himself.

“The important thing in life is not to loose faith in your own abilities, to not lose your spark. Many postpone everything believing that they will do all the fun things when they retire. One should not postpone but do.”

In 1951 Olle Krantz gave up his day job as proprietor of a small grocery store on Visingsö to become a professional artist to the disbelief of others. But Olle persisted that he would live his dream and so he did.

“…every community should have place for an oaf and on Visingso the oaf is me!“

During the 1940’s he had begun building the cottages that would become a vital part of the Temple estate (Tempelgården) and in 1956 as he bought and rebuilt the Temple that have given the estate its name. The Temple is a copy of the Parthenon and was originally built by the Theosophists by the castle ruin Visingsborg for their world peace conference on the island in 1913. Olle used it as a centrepiece in the garden and as an exhibit hall for his paintings. The estate can be said to be his legacy to Visingso and those visit the island. 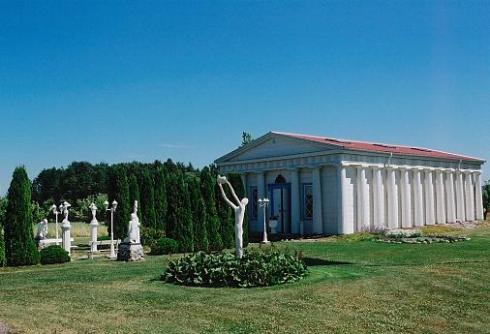 Olle Krantz did his last exhibit in 1996 and he could look back on a life as a professional artist on Visingso that spun over more than four decades. He is one of those who gave all for art for the purpose of art, he was able to create his own universe and open it up for those interested. I believe and hope that there still is a place for this kind of personalities that lets us now that not all need to conform and be conventional and who can show us an alternative view of the world.

The temple estate is still open for visitors, at which one can rent a cabin and live on the estate among his art; in the garden are many of his statues and in the temple are a selection of his paintings. Though it’s been a few years since I visited it I believe it’s still a treat. I’m sorry to say that I don’t have any good pictures of the estate but there are several pictures on the home page.

The temple and art exhibit

(Quotes translated by Magnus Reuterdahl from an article in JP 1993)

The photo of Olle Krantz is probably from JP though I am not sure, if the owner of the photo wants it removed please send me a mail on inventerare [delete_this]@hotmail.com