Last Wendsday we went to Vastergotland and Lodose museum, the plan were to go to Lodose (Lödöse) museum and then slowly return via the northen parts of Vastergotland to Jonkoping stopping at ancient monuments etc, the weather got a bit bad though so all we did was visiting the museum, which in itself was well worth the trip. 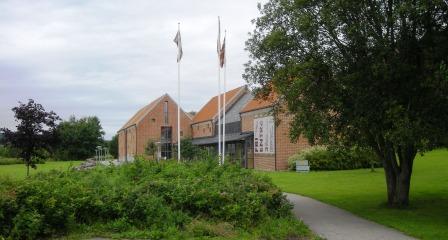 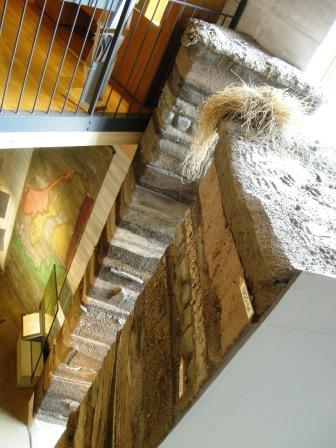 A model scale 1:1 displaying the thickness of the cultural layers

Lodose is small town ca 40 km north of Gothenburg.  Lodose is possible best known for the finds from the medieval town, ca 1/3 of the medieval town has been excavated, the cultural layers are up to 4 m in depth and more than 150000 finds has been registered.  Lodose oldest parts as a town is from the 10th century, this is not say that there isn’t older phases, it was one of Sweden’s main port and trading cities in the Middle Ages and for a long time the only facing west. Due to changing natural conditions the operations were relocated during the late 1400’s and 1500’s to what came to be Gothenburg and in 1646 and Lödöse lost its town privileges.

I must say I like this museum, is just big  and/or small enough, the premises are fresh and the exhibits interesting. The exhibits are what could be called a bit traditional (which I find positive) but at the same time it feels fresh and up to date, lets call it post pomo pro retro.

There are plenty of findings in the displays, they are partly broken down in traditional groupings such as trade, port activities, crafts, etc. but the  artifacts returns in several contexts which shows that they are multicontextual, eg. it dispalys that we must interpret them according to the context . The information is narrative but leaves room for interpretations and questions, though the visitor isn’t left on his or her own as I feel has been the case in some museums in latter years. This is an example of a museum that uses their collection in a good way, that trusts the value of the artifacts in themselves and in their contexts and dares to tell the story of them. This is the kind of museum that I like!

I took some pictures of the displays and on some finds

From the medieval exhibit; 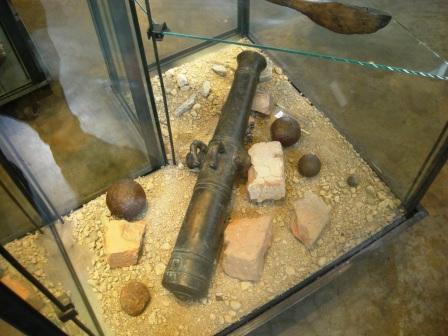 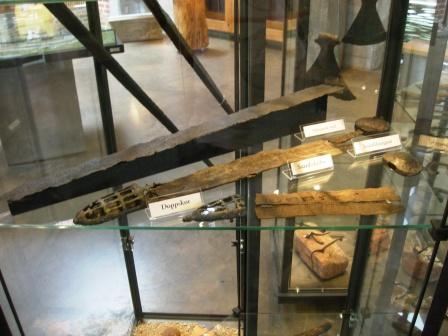 Knife sheath made of tree and lead 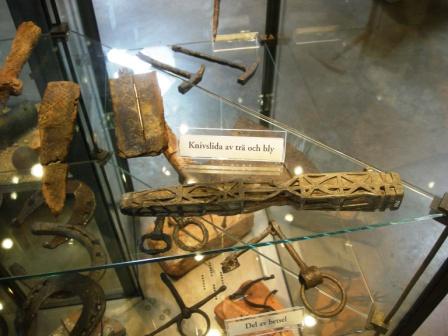 Make a coin, I did 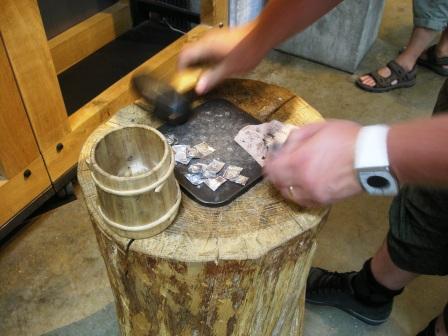 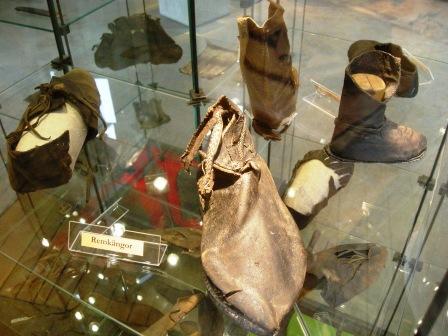 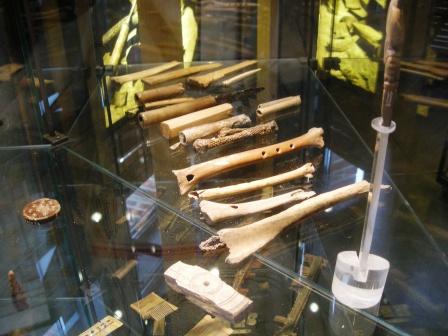 A funt of tree 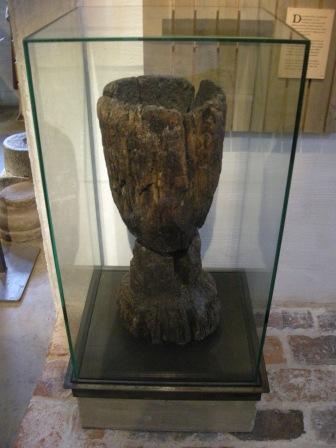 As you can see below runic inscriptions can be carved into almost any object. These medieval finds shows that runes were used by all groups in the cities, in other words rune literacy during the Middle Ages are high in the cities. Still we find very few finds of this sort in the country side though this might be due to preservation possibilities. In the deep cultural layers of the medieval towns there is a much better chance for objects of tree or leather to be preserved.

At the back; part of a Besman scale, in front; a measuring tool with a rune inscription.

A thresh tool with a runic inscription 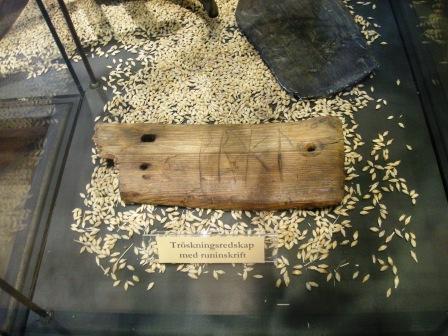 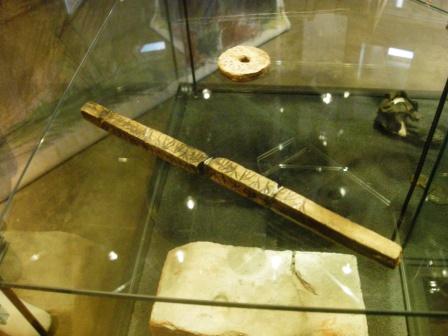 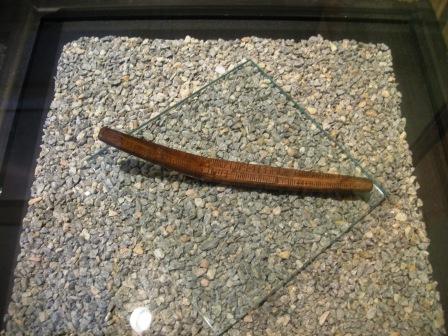 From the prehistoric exhibit; 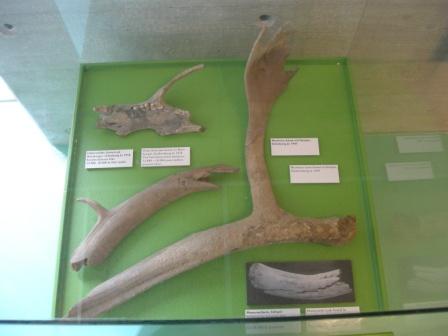 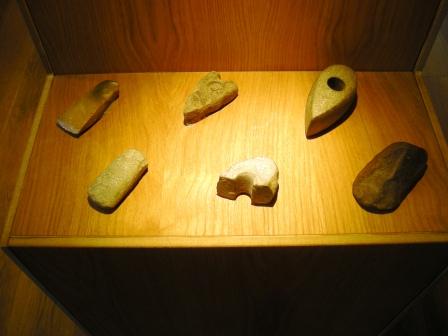 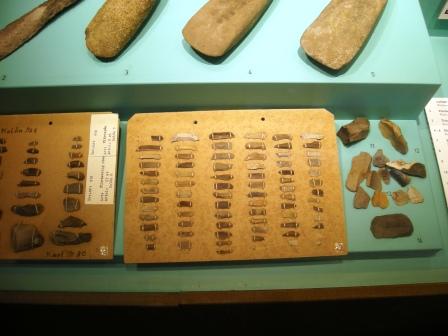 These flint scrapers are either from the late Neolithics or the Bronze Age. 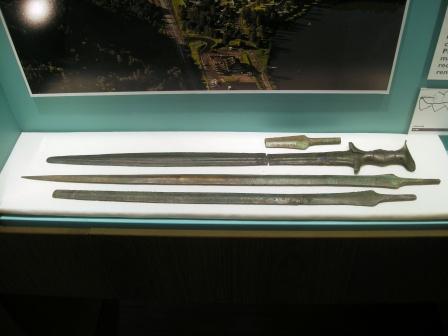 The next display is a 3-D model of the Gota river valley on which is projected how the country has raised itself and the valley has changed over the last 12 000 years, since the last ice age, and how man has taken possession of the landscape. A good presentation that is clear and makes it easy to see the changes, man made as well as natural. I miss one thing though and that is markers that show where today’s societies are. This is shown in the very beginning of the presentation but I feel that the presentation should gain on showing this all the way through.

If you’re in the neighborhood this is a museum you shouldn’t miss, it’s well worth a detour.

Yet another Monday at Skepplanda

Monday mornings are often grey, so was this one. It started witha grey sky and heavy clouds that kept pouring rain on us but as the day progressed so did the weather. During the worst part of the rain we took a quick pause and went to Lodose museum to see their exhibit on the coastline curves on the west coast of Sweden, ie a display on how the water table have changed since the last Ice Age and onwards. A very interesting and clear exhibition, unfortunately we were only had a few minutes to scatter through prehistoric and medieval exhibition it seemed very nice and I’ll return later this summer to the museum for a more detailed visit.

Today we found out first shard of pitted ware, earlier during the excavation we’ve found several small ceramic shards but no ornated ones until now. 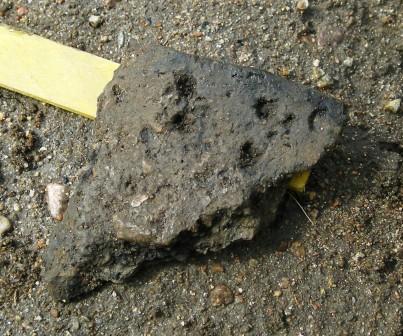 I also found my first arrow head, or at least a part of an arrow head today… though only the tongue. 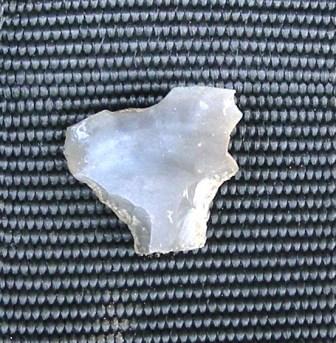 Well, the beginning of the day was rainy and gray but at the end the sun was up and we’ve made a visit to Lodose museum, found some nice finds – all in all it turned out really good.