Welcome to the 96th ed. of the Four Stone Hearth blog carnival!

I like to have something that goes through the carnival as a red thread, something that connects the dots – and as the first posts are artefact related, then artefacts it is. These illustrations are of artefacts found in Sweden published in Oscar Montelius (1843-1921) book Sveriges forntid. Försök till framställning af den Svenska fornforskningens resultat. Atlas (Sweden’s ancient history. An attempt to an account of the research of Sweden’s ancient history. Atlas.) illustrated by C.F. Lindberg and published in 1872.

Oscar Montelius was an important person in the early Swedish and Scandinavian archaeology.  His scientific output includes over 400 works. He is possibly best known for developing a relative chronological dating method, known as Swedish seriation. By setting up development series for main artifact types, i.e. axes, scrapes etc., and examine how these items were combined in closed finds he could create a relative chronology. Artifacts in a feature underneath another feature is older than those found in the upper one etc. He then was able to allocate artifacts into different time periods; Stone Age, Bronze Age, Iron Age etc. His works still is relevant, at least regarding finds from the Stone Age and the Bronze Age, and if nothing else these are beautiful pictures.

Let’s start this carnival with three posts on things, objects and gadgets by Gordon Kingston from The Heritage Journal. He writes on metal detecting vs. archaeology in Ireland and Britain. I guess most archaeologist see metal detecting as an important tool whilst excavating or in some cases surveying, in these posts the issue concerns non-archaeologist metal detecting groups and individuals. Some are for it and some against it, some got good motives others are driven by pure greed. I believe these three articles provides a good basis for reflection and discussion in a much larger area than just Britain and Irland. A 4th and final post in this series is on its way. Part 1, Part 2, Part 3.

Dig girl writes about looting in general and in Iraq in particular. She writes Not a week goes by when I don’t run in to someone who would love to “own a piece of history” and display it in their den for friends and family to see.

Today’s garbage tomorrows artifacts, Middle Savagery, pounders on why people litter and of course  started doing a little bit of research realizing that while we research trash exclusively as archaeologists, there isn’t a whole lot about modern attitudes toward trash beyond William Rathje’s Garbology.

Martin Rundqvist at Aardvarcaheology calls me a gloating, grave loving, corpse lusting necrophiliac. Well it’s not as bad as its sounds – he calls all archaeologist and especially osteologist this in a more or less humoristic post that really concerning us all. Are we as so many before us becoming zombies in our respectively work places?

As I’m grave lusting and like ghouls I just couldn’t keep Sandbian’s post the ghostly hills of Scania on Bronze Age mounds in the south of Sweden out of the carnival, could I?

Another zombiesq post, The Antiquarian’s Attic report on a ship risen from the grave; the SS ROBIN, the world’s last remaining steam coaster, which is now on its way back to London to become a floating museum in Docklands, after a two-year re-fit in Suffolk.

Leaving the ghoulishness behind Archaeolog reports that about the exhibition Unearthed at the Sainsbury Centre for Visual Arts, University of East Anglia, Norwich. The exhibit featuring prehistoric figurines from Japan, Romania, Macedonia, Albania, and the UK. It opens on Tuesday 22 June and runs through the summer. The ideas expressed via the exhibition are done so in order to move beyond text and thereby create new opportunities for thought and consideration. Prehistoric clay figurines from Jōmon from the Japanese archipelago (c.16,000-2,000 years ago) and the Eneolithic from the Balkans (c.8,500-4,500 years ago) are for the first time brought togetherand being displayed alongside contemporary artworks. For me this is interesting as it comes somewhat close to what MAP (Museo Arti Primarie aka. the Museum of Primary Arts) is currently working on; an exhibit on neolithic painted pottery from different parts of the world, among them the Yangshao traditions in China and the Naqada culture in Egypt, in a project called Neolitico Futuro 2, where the Yangshao project (a project I and a colleague runs) are involved.

From the dead, the departed and the unearthed to the living, we move from the past to the present: Barbara Arisi of Material world writes about the Matis Indians, their cultural heritage and the development of their world since they established contact with the Brazilian government in 1978, before that, they had had just sporadic relations with outsiders, mainly rubber tappers and other Indians.

Moving on to Puerto Rico, as the blog Time Travelling really doesn’t move all that much in time but stays contempary – showing us some pictures of graffiti on the walls and buildings of Rio Piedras, the university district of Puerto Rico.

From Somatosphere Stephanie Lloyd reports on two conferences; the biennial meeting of the Society for Cultural Anthropology and the annual meeting of the Association Francophone Pour le Savoir. Besides reporting on the lectures, this post has a substory about a gruesome murder of which no one appears to be bothered with, except the author: “THWAP!!” followed by “Bang! Bang! Bang!” …  …where culture obliterate nature and no one appeared bothered by it.

Sometime some science really blows me away (literally), A Hot Cup of Joe, shares a piece that on the one hand is a great spectacle but on the other hand is scientific insanity (I had to use the external link!)

From one unnatural explosion to a natural one – Greg Laden writes about the 79 AD Vesuvius eruption over Pompeii – and thus returning to the Rundkvistian zombie ghoulish theme – the people at Pompeii, who’s remains were found trapped and partly preserved within ghostly body-shaped tombs within that pyroclastic flow, how did they die? –  Did they suffocate? Did they die of gas poisoning? Dis they die of falling brimestone? – No!- Greg’s got the gruesome answer; they…

From one kind of cooking to another, Eldrimner blogs about Viking Age and medieval food and in this post about grinding, do you know how many times you need to grind flour in a handquern before baking bread? Eldrimner have experimented on this.

To your bread you might want something to drink and at A Very Remote Period Indeed you’ll get a tip; Tut’s royal gold an unfiltered imperial Egyptian Ale.

More contemporary but never the less a foodish kind of cultural heritage – you ever lusted for that fast food menu that’s no longer available  or do you know what a McGangbang is? Cavalcade of awesome has the answer! 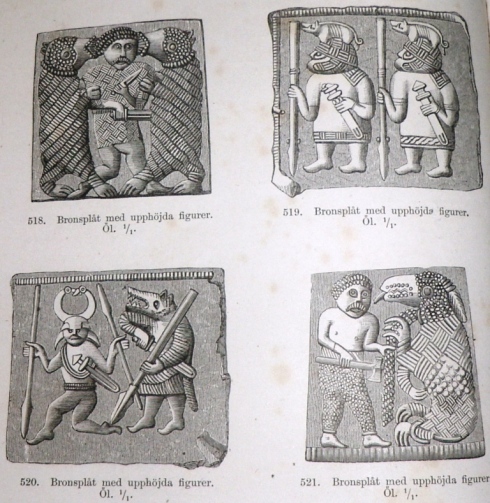 The ghoulishness set aside this edition came partly to be about artifacts, illustrated with Swedish prehistoric artifacts unearthed in the 19th century and opening with posts on metal detecting and looting – the two are linked but not synonymous with each other. Metal detection is a useful archaeological tool and regulated properly, it can also be a fun hobby, and thus a possible complementary source for archaeologists and museums. How to regulate metal detection is one question, another regards trade with ancient artifacts. I don’t have anything against recreational metal detecting if this is done in a controlled environment (for example in collaboration with museums, local historic associations etc), if the finds are properly recorded and taken care of by the museums etc. and it is done in environments that don’t threaten known historic or ancient remains (for example in fields or areas disturbed by development). When discussing this issue it is important to remember that this creates other problems such as financing the care and preservation of the finds, legislation and control, education/licensing etc.

Trade with ancient and historic artifacts and remains are something that I generally am against. However there might be exceptions – what do you do with mass materials that museums are not interested in, finds without contexts and artifacts already in old collections etc? The cultural heritage is a common heritage, and valuable to one and all, it should not be own man’s property but accessible to researchers and the general public for the common good.

Finds taken from a context without proper documentation or knowledge looses at least some of its potential scientific value. It also diminishes the scientific value of the given context.

By the way Heather Pringle at Beyond Stone & Bone Archive, Archaeology magazine’s weekly blog, have issued  a  Top Five Archaeological Bloggers – check it out!

Thanks for contributions and great posts!

I’m currently in Stockholm on vacation so I’ll go back to what I do when I got a few days off, visiting ancient monuments – here’s a post on what I did the other day!

The next carnival is set for July 21st  it currently has no host, if you interested contact Martin Rundkvist at Zenobia: Empress of the East.

Have a nice summer!