Do you love H.P. Lovecraft?

Me, I’m a big Lovecraft buff and oddly enough it seems a lot of other archaeologists/anthropologists is as well. In Stockholm as in many cities there are free newspapers around, as Metro etc. Since I got my smart phone a few years back this is not a media I turn to too often, though I did when I was a student back in the days – all things free is good, or something like that.

Today going by the sub something caught my eye though, on the opposing seat lay a Metro and the headline, or rather the add, that caught my eye read: Vi älskar Lovecraft! – We love Lovecraft!

March 26- April 1st Serieteket, in Stockholm, gives tribute to the horror master – holding seminars, readings and what they call Bazaar of the Bizarre read more at Kulturhuset.se (OBS in Swedish).

To Italy and back again

Been on a trip to Italy – that should be good for posts on archaeology and cultural history. Well, I’ve got some culture though the main purpose of the trip was another type of culture; wine. For the second time I’ve been at the European wine bloggers conference, this time around in Franciacorta. I’ll get back to you on that in the coming days, I’ve had time for some ruins but I also held a short speech on how to combine interests, in this case wine and archaeology.

If you know your Tolkien you know the title I’ve paraphrased, when I got home I had several books waiting for me;

Secondly the annual archaeological journal Utskrift number 11 & 12 had arrived – lots of interesting articles on the archaeology in Halland a region in the southwest part of Sweden – these were sent to me to review on the blogg – many thanks to Kulturmiljö Halland.

Thirdly this years early Christmas present from the society Runica et Mediævalia. As always a bundle of joy:

I also is working on Elin Fornanders dissertaion that is put forward at Stockholm University tomorrow.

Well, that’s whats on the bedstand the next coming days, weeks, months?

New books on my reading list, from Runica et Mediævalia: 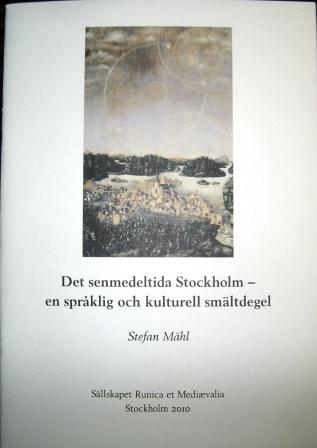 I like to scavenge throw flee markets and second hand shops. I look for different things but most often end up buying books. Today we managed three stores in Karlskoga. Didn’t find all that much but as always a few books ended up in my possession. The County museums in collaboration with the local historical society annually publishes books. Örebro County publishes the annual book called Från bergslag och bondebygd (From mining and farming districts). These books normally concerns local art, history, cultural history, archaeology etc. Sometimes there is a theme to these books such the 1980 edition: pictures from the world of work.

The authors of these books are both professional researchers and local historians and others. The content goes from science to trivia. I will return to them or parts of them in a future post.

The American Journal of Archaeology (AJA) blog aims to complement the book reviews published on AJAonline.org and Forum articles published in the AJA. As seen in the post July 2010 book reviews the reviews are accessible through pdf’s and the comment field open for discussion.

I like this kind of accessibility – and possibility to comment on reviews or articles – a great way of opening the publication to the readers and others. I know I will follow this blog.

On the threshold of (archaeological) history

First things first, this is not the 1938 detective story To Wake the Dead by John Dickson Carr but a book on renaissance merchant Cyriacus of Ancona (1391-1452) aka Cyriacus Pizzecolli who went and became the original Indian Jones by Marina Belozerskaya. 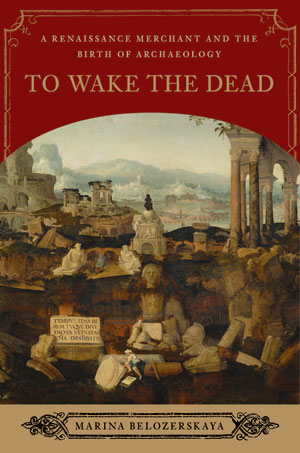 This book is a nice read; it has pleasant flow and good prose combined with an interesting story on an interesting man. It takes us to 15th century Italy, giving a frame of life and thoughts in the 15th century around the Mediterranean Sea. Especially interesting is the description on how man looked at historic/ancient monuments, the past and prehistory.

As the arch of Trajan in Ancona catches Cyriacus eyes and a question begins to dwell within his mind, archaeology as we know it takes its first staggering steps. If archaeologist were keen on pilgrimages this should be one of the stops as it was here it all started. Well I guess most of us are really; there are sites we are dying to see and we more or less pilgrimage, often enough in groups, to see them. Evan though they in many cases looks just like any swamp, forest or meadow we know through books and/or museums that once there were a palace, a castle or a settlement at just that spot and we are fascinated by just being there.

Wheatear or not we see Cyriacus as an archaeologist or not his legacy is nether the less important regarding cultural history. The sketches and descriptions is, or should be, of great use for those studying the area as many of the sites he visited and described have been destroyed or changed long before we had a chase to see or study them. His sketches and descriptions are the records that describe what we see as ruins and can help to give life to long lost ancient remains. I believe that we, as archaeologist, sometimes tend to live a lot in the present using cleaver inventions such as 3D-programs, GIS applications, Total stations etc to record and describe the past. Though wonderful tools it is important that we don’t forget that there are many sources that can help us to verify or falsify what we see. Legacies such as that left by Cyriacus of Ancona is such a tool.

There are several books and articles written on what could be called archaeological history, describing the work and accomplishments of previous archaeologists, often with a critical view. The authors of these texts often stress the importance of knowing where archaeology comes from, who formed the basis of theories and based on what, what’s been excavated and why, how was it excavated and what questions was asked and perhaps more important which questions were at the time of no importance or was not asked. Well here is a recollection of, if not the first one of the first, steps of archaeology or perhaps better put comparative studies of the past.

As I read this book I find myself asking questions, which I feel is a good thing when reading a work of science.

A big thank you to W.W. Norton & Company for giving me the opportunity to read this book.

Some “new” books in the collection

I’ve got a few post not ready for posting yet; on the rune stones at Fresta church north of Stockholm and on the adventures in Skarlunda outside of Sodertalje. These will be posted during the week to come as I will work in Lerum some miles east of Gothenburg.

This weekend I’ve been attending a wedding and gotten a few hours in Jonkoping where I picked up a few books, some more fun than others, what do you think of these cool titles; 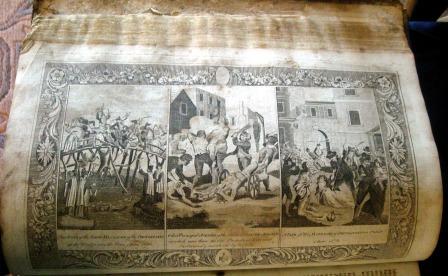 Cutter, Calvin, M. D. 1854. A treatise on anatomy, physiology, and hygiene: designed for the colleges, academies, and families. Published by Benjamin B. Mussey and Co. Boston, 466 sidor.

Waddilove (W.J.D.)1847. The Lamp in the Wilderness with Fragmenta Vetusta. An Examination of Symbols as applicable to History and explicable by Scripture. Hexham 1847

Among these I also got a few others, I’ll get back to them later.

The future of archaeology

The essays are divided into three themes.

The book starts with the statement that the grand narratives time is over and that the regional and local instead have become the key. However the proclamation is a bit premature as it still is presented by geneticists, evolutionary scientists and others. So the editors asks the question if it is time for a comeback for the grand narratives, if this is something we want and how they will look like?

Personally, I am glad that we do not have Twitter archeology – prehistoric summarized in a few lines in a news headline from – though to some extent this is where have at present. How do we achieve with our results, knowledge and ideas to the public without being speculative or headline junkie. As they say publish or perish – if your not visible you don’t exist – and the grants equals zero.

Anyhow this seems like a good and interesting book. In Sweden it feels like the essays in themselves been a thing of the past especially within archaeology so this feels a bit fresh – as recycling is with the time – so maybe essays are a part of the future of archaeology!

Well I’ll get back to you with more thoughts on the individual essays.

Romance of the living dead

It’s seldom I get excited by a book without knowing much about it but a crossover between Jane Austen and George A. Romero seems so unlikely that this a must read for me. Just look at the cover and say that this isn’t what you crave, what you know, what you need; One part rotted flesh, one part brain substance, one part guts, one part romance and of course a red heart –  put in the mixer  – now colour me blood read and throw a blood feast, I wanna read… 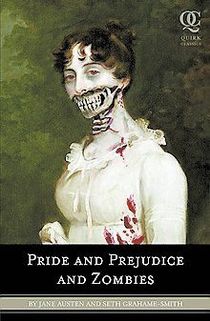 The book opens with the lines “It is a truth universally acknowledged that a zombie in possession of brains must be in want of more brains” and is said to be an expanded (enhanced?) edition of the beloved Jane Austen novel Pride and Prejudice featuring all-new scenes of bone-crunching zombie mayhem.

Kinky Rockcarvings in Sweden by Hjalmar Olsson is presented as an entirely new kind of history book, I’ve not read so I don’t know nothing about it bur who can resist such an equivoque tile. After reading about it I think history book is perhaps not the correct definition, but it seems fun.

Regarding the interpretations the publishers mentions that they may not be entirely accurate, who would have guessed? But sometimes you got to let the scientific interpretation stand back in favor of a looser and crazier interpretation. And who knows in the middle of crazy is perhaps something useful. 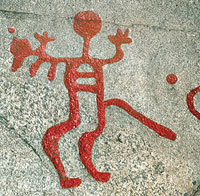 (Interpretation from the book; Hooray! I just solved my erctile disfunction!)

As they interpretation is in eye of the interpreter.

The carvings in the book are from the Tanum area in Bohuslän, Sweden, a part of UNESCO’s World Heritage List.

The pictures are downloaded press images from http://www.kinkyrockcarvings.com/