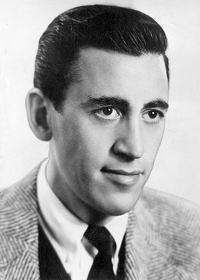 J.D. Salinger has past away at age 91, an eccentric and legendary author best known for his Cather in the Rye (1951). Catcher is a great read but my favourites are his debut novel A Perfect Day for Bananafish (1948) and Franny and Zooey (1961).

Now Salinger is one of those authors that I got know long before I read anything of his work. My first real contact was in fact Ian Hamilton’s biography In Search of J.D. Salinger: A Writing Life (1935–65) from 1988 telling the tale of the author that did not want to be published disturbed or be known. This got me to read and buy and read Salinger’s body of work. It’s a fascinating tale that I’ll have to reread some day.

Rumours have it that Salinger never stopped writing and that several novels and as in any death speculations will arise if or when they’ll be published, there is also a risk or chance (depending on stand point) that Cather in the Rye makes it to the movies. In one way I would love to read more stories from Salinger on the other hand he choose not to publish them and to live out his life away from the public eye.