I love the New Year, for me it symbolizes both an end and a beginning. This edition marks the end of the year and gives away the torch for a new year filled with posts on our beloved subjects. I’ve spent Christmas searching the internet for interesting post and blogs, and I feel that I’ve found a bunch of good stuff.

As the new year starts with January so will this edition of 4SH with a little help from a friend;

In bleach’d forbidding robes array’d
stern January treads the wold,
within his icy hand a blade
of lethal might – the cruel cold

Vainly the sun with slanting dreams beams
attempts the tyrant god to slay;
the naked boughs and frozen streams
feel still the rigours of his sway.

But when the twilight shades descend,
and heav’n unveils before our sight,
there shines a promise of the end
in visions of celestial light.

I think it’s interesting that most archaeologists and anthropologist I’ve met, like me, holds H.P. Lovecraft in high esteem. Maybe it’s just that we have great taste in academic subjects as well as literature or maybe it is as Martin Rundkvist proposes in this post.

As I’m on the subject of Lovecraft my eyes fell upon this article, a bit old I know, which in a far fetch way links my surname to both that of Lovecraft and Einstein. A fun read if you’re into a bit of conspiracy thinking.

While we’re on the subject of the weird and the unexpressible lets haste on to Neuroanthropolgy and a post on how the dead stay with us or rather how we perceive this phenomenon and the anthropological research concerning this, in other words a post on grief and embodied remembrances.

This illustration of Neolithic seal hunters along with several others can be seen on his blog (published with the artist’s permission).

From the written word and illustrations to notes; at News for Medievalists comes a tale of newly discovered medieval music.

From the popular culture to academics; Julien Riel-Salvatore at A Very Remote Period Indeed gives us insight on the various topics his archaeology students currently are working on (Btw the referral to your wife is a gem; an anology Testimony of a …. gives me the creeps though).

Ever heard of electronic Archaeology? I hadn’t! Shawn Graham has a blog named just that, in this post he discusses an online system for teaching among other things.

ArchaeoBlog gives us tips on further use of google earth. 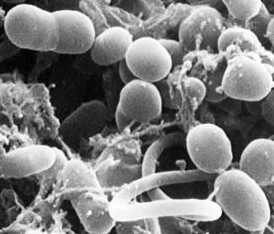 Take a deep breath and dive into the Somatosphere, Erin Koch has a great article on “Microbes and Anthropology”.

During the last year I’ve read a lot of posts on Neanderthals on several blogs, obviously so has others; at Dienekes’ anthropology blog is a list of 13 posts, check out if you missed any. But I think they missed Mathilda’s and Evo and Proud’s late 2008 additions in Neanderthal related posts.

Do you know AIS? Do you walk on two legs? If the answer is no and yes then this post is for you! Moneduloides discusses human bipedal locomotion and AIS. (Of course the post is interesting for those knowing AIS as well).

From anatomy to intelligence – and the test of just that – Neuroanthroplogy responds on the issue and asks themselves and us what they tell and for whom they work.

Hear yea! Hear yea! Buddha was an archaeologist! Read all about it at the H-word. Headlines vs. contents, archaeology in the hands of journalists.

Archaeoastronomy has had a busy day! How so? Well combine questions on how the world started, the story of Ymir,  burglary and Derby and the answer is …

Going from burglary to law; Steven Tills post on law and punishment in the middle ages, maybe something to pick up as an example in Derby, at the blog with the long name; Medieval History, Historical Fiction, Fantasy, Writing Fiction.

Asa M Larssons blog Ting & Tankar (Things & Thoughts) normally blogs in Swedish but for 4SH she makes an exception in a post well suited for the New Years feast; Neolithic Alcoholic beverages, though nothing on toasting traditions of the era. If you’re interested in the Baltic Bioarchaeology meeting 2009 (Bioarchaeology and Forensic Anthropology) Asa also has a post on that (in English).

I’ll end the carnival with a few announcement like posts

The top 100 Anthropology blogs according to Christina Laun is announced at the Online Universities blog, I miss a lot of blogs I follow in here (and mine) but I’ve also found a few that are new to me. I qualified as Four Stone Hearth blog carnival is number 10.

As money can be spares after the holidays here’s a few free bees; Ohio Archaeology blog announces that The Ohio Archaeological and Historical Society Quarterly (later Ohio History) is available on-line for free. As I understand it this is a treat for those interested in information on Ohio Archaeology, Natural History or History. (). Yet another free online publication I stumbled upon is Anthropology & Health.

At last but not least a big congratulation to Aardvarchaeology for its two years and running at ScienceBlogs, I personally hopes for several to come.

Now it’s time to close the curtains and give room for another stage, the next edition of 4SH will be held at Moneduloides in 2009.

I would like to take the opportunity to thank all who have hosted 4SH and all of you who write great blogs, you’ve all in some way opened my eyes for new input and ideas and thanks to all of you who has presented me with great posts to this edition.

Let’s hope 2009 will be a good year for bloggers, anthropologists, archaeologists, cultural heritage workers etc. around the world.

As my body continues on its
journey,
my thoughts keep turning back
and bury themselves in days past.